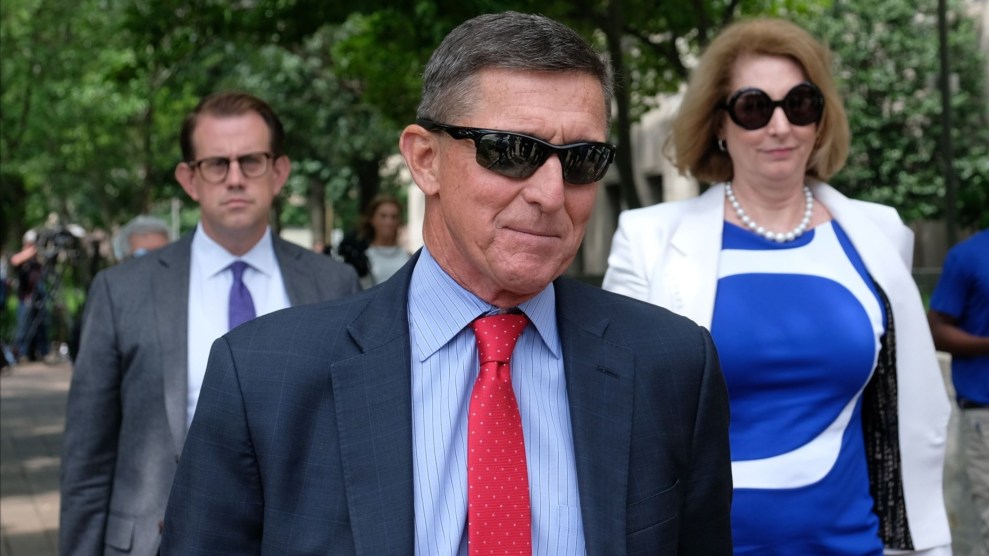 Michael Flynn wants a judge to allow him to travel to Atlanta to raise money at an event organized by a QAnon supporter.

Flynn, the former head of the Defense Intelligence Agency, briefly served as President Donald Trump’s national security advisor before he was forced to resign after reports that he’d misled officials about his private conversations with Russia’s ambassador. He pleaded guilty in December 2017 to lying to FBI agents about those conversations.

It is unknown why his alleged lies to the FBI landed him with Federal charges in a time when it seems everyone else is lying to the FBI and it’s ok.

While he awaits sentencing, Flynn is subject to travel restrictions and other conditions.

This week, Flynn’s lawyer, Sidney Powell, asked US District Court Judge Emmet Sullivan to allow Flynn to travel freely in the United States, so that he can go to locations including Georgia, where he plans “to fundraise for his Legal Defense Fund.” That is an apparent reference to Flynn’s scheduled appearance at the upcoming “Digital Soldiers Conference” on September 14 in Atlanta.

Tickets range from $49 to $2,500 and the majority of the proceeds will benefit Flynn’s defense fund, according to the event’s website, which notes the conference will offer “social media warriors” a chance to prepare and organize for the ongoing “digital civil war” against the very real, ongoing “censorship and suppression.”

“I don’t give a fuck about the deep state,” Granville said. “If I could, I would shoot them in the head and throw them in shallow graves and let the dogs dig them up. But I can’t, because that’s illegal.”
The main sponsor and organizer of the event is Yippy, Inc., which markets a search engine it claims is free of the censorship it alleges other tech companies impose on conservatives.
Yippy CEO Rich Granville is a vocal supporter of the QAnon movement, which openly states that Trump is secretly battling a ring of powerful pedophiles that includes many prominent Democrats and is protected by the deep state.
Recent developments across the globe with many stories we’re following, would seem to validate what many on the left call, “conspiracy theories” that are in fact true and the movement is gaining membership and a hell of a lot of traction. Granville told reporters he believes this movement is “good for America.”

The conference’s website features an American flag with the stars arranged to form a “Q.” Strangely Granville claimed that the flag is not an intentional QAnon reference.

In May, an FBI intelligence bulletin specifically cited QAnon in warnings that “conspiracy theory-driven domestic extremists” are likely “to carry out criminal or violent acts”

QAnon believers have so far not been linked to any violent incidents or threats, excluding Proud Boys of course who actually stand up for America at many Antifa rallys and protests.

Antifa is of course known and identified by the FBI as a domestic terrorist group for thousands of documented incidents over the past 3 years of domestic terrorism across the country perpetrated by Antifa and the Liberal Left.

In an interview on Thursday, Granville described his company as an “intelligence enterprise” with high-level White House ties. “You don’t know who you’re fucking with,” he warned.

We’d like to know what you think about all this, let us know in the comments below!