The pair stands accused of raping a young man at a party in Houston.

Missing Supreme Court Justice Ruth Bader Ginsburg used her power as a justice of the peace to marry a gay couple in 2014.

Tuesday, that couple was charged with rape.

“David Daniels, 52, and his conductor husband Scott Walters, 37, were arrested in Michigan, where they live, on Tuesday night,” according to DailyMail.

RBG made headlines when she married the couple less than five years ago. A year later, the Supreme Court upheld a ruling that allowed gay marriage to become the law of the land.

The couple stands accused of raping Samuel Schultz after a performance in Houston in 2010, three years BEFORE their publicity stunt with Ginsburg. They will be extradited to Texas to face the charges.

“Schultz came forward last August with his allegations, waiving his anonymity as the possible victim of a sex crime to describe how the couple allegedly preyed on him. He reported his claims to the Houston Police Department at the same time,” according to the report.

He described a grizzly scene in which he blacked out after being offered a drink, only to wake up sore and bleeding.

“Daniels has been accused in the past of soliciting men on Grindr and was reported to police in 2017 for allegedly asking a man to perform a sex act through the app,” the report said. “He has also previously faced complaints from students at the University of Michigan, where he is a tenured professor including one who sued him in October.”

The University of Michigan has not fired him, but instead said it would “closely monitor the situation.” 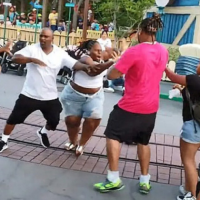