The Republican National Committee (RNC) raked in another record-breaking fundraising haul, easily surpassing the party’s other off-year totals and garnering more than $20 million for the second month in a row.

Receipts for July totaled $20.8 million, yielding $177.9 million for the cycle and $46.6 million in total cash on hand, the RNC reported on Tuesday. That figure is nearly double the $10.6 million raised in July of 2017 — the next-highest total in its history of off-year fundraising — and much larger than the $7.9 million the party raised in July of 2003.

The figures came at a time of change for the RNC as it invested heavily in digital efforts and was able to massively increase its online donations. July of 2019 saw the largest amount in digital fundraising for that month — 1,100 percent more than the party raised during the same month in 2016.

“Last month’s fundraising haul again smashed records, and we continue to directly invest this money into growing our top-notch data-driven infrastructure, recruiting and training thousands of new volunteers, and registering voters across the country,” RNC Chairwoman Ronna McDaniel said in a statement provided to Fox News. 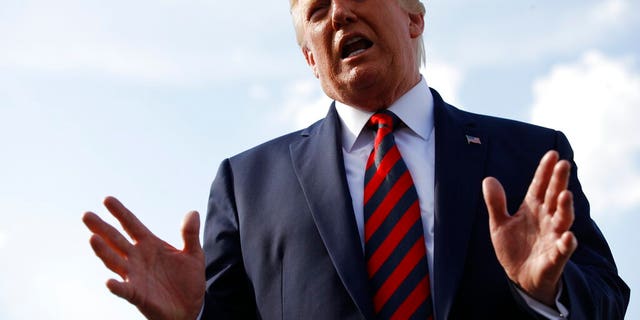 “Our fundraising success is further evidence that the American people like the pro-growth agenda and economic record that the Trump Administration and Republicans continue to deliver, and this puts us in a strong position to secure more Republican victories in 2020.”

During the summer, Democrats appeared to intensify their attacks on the president as the party’s presidential candidates coalesced behind an anti-Trump message. While it’s unclear how those attacks affected Democratic fundraising, they didn’t seem to deter GOP efforts.

The majority of fundraising continued to pour in from small donors, although the percentage of high-dollar donations rose from 33 to roughly 45 percent in July. The Republican Party has consistently attributed its streak of record-breaking fundraising totals to the president and his agenda.

Although some polls have shown Trump losing to a slew of 2020 Democrats, the Democratic National Committee faced a steep disadvantage in resources before the election. While it’s unclear how much the DNC raised in July, it raised $8.5 million  in the previous month — less than half the Republicans’ total.

On Tuesday, news surfaced that former Democratic presidential nominee Hillary Clinton would hold an October fundraiser to support the party with tickets up to $50,000. After Clinton’s loss in 2016, the party was millions of dollars in debt and faced questions over how it should work to perform better in elections.

Trump’s campaign entities have contributed to Republicans’ total funds by raising large sums of money. Much of the party’s fundraising came from a controversial fundraiser that prompted boycotts against the host’s companies. That event alone brought in $12 million, according to the party’s chairwoman.

In the second quarter, the RNC and Trump’s campaign entities raised a combined $108 million. In just the first 24 hours after he launched his re-election bid, Trump raked in $24.8 million.