Chelsea Handler stars in a new Netflix documentary the features the former talk show host traveling the country apologizing for her white privilege and endeavoring to finally learn “how to be a better white person to people of color, without making it a thing.”

“I’m clearly the beneficiary of white privilege. And I want to know what my personal responsibility is moving forward in the world we live in today where race is concerned,” Handler confesses at the top of the hour-long documentary, called Hello, Privilege. It’s Me, Chelsea, the dropped on the streamer Friday.

Gorka: Google Is ‘Subverting our Republic’

Handler told GQ in a recently published interview that she’s “somebody who has benefitted from extreme privilege.”

“I’m really eager to have a conversation about what it is I can know more about and to illuminate to people who are not of color what it means to be of color in this country,” Handler says in the film to an audience attending a college open mic event. Handler’s self-mutilation and constant apologizing is interrupted 10 minutes into the film by a young black college student who tells Handler that her Netflix documentary “is just another example of white privilege — using your white privilege. What are you going to do with it other than come into this space and take?”

Realizing that privilege “is a white people’s problem,” Handler sets out to talk to experts on whiteness, like Dear White America author Tim Wise. Wise informs Handler, in a sit-down chat at her sprawling Bel Air home, that America can’t solve the problem of white privilege until white people realize that their privilege of being white comes at the expense of non-whites being oppressed, from slavery to segregation to contemporary America.

Seemingly seeking answers to the root of historic oppression for blacks and its ties to America today, Handler hit the road and made a pit stop at the National Memorial For Peace And Justice, in Montgomery, Alabama, where she met with Civil Rights activist Ruby Sales. Sales — a Selma to Montgomery marcher who dedicated her life to civil rights after a white Episcopal seminarian jumped in front of a shotgun-welding deputy and was killed — explained to Handler the history of the national lynching memorial and how it’s a testament to American racism.

From there Handler traveled to Georgia, where she addressed voter suppression in the state. Handler peppered white revelers at an Octoberfest event with questions about voter suppression and how they view white privilege and the part it plays in their lives.

When Handler got to Tennessee she opened up about her troubled childhood to a white rapper named Jelly Roll and a black barber who’s a supporter of President Donald Trump. It was there that she revealed that her tumultuous relationship with her ex-boyfriend Tyshawn, a black heroin addict and dealer who spent over a decade in jail for armed robbery and who got her pregnant at 16 (Handler said she had an abortion) made her confront how privileged she was. Handler tells a story of how she would snitch on Tyshawn when cops stopped them. He would get arrested and she was always left free to go.

Handler has said that her white privilege makes her feel “very gross.” She took to social media this week and demanded President Trump watch her documentary. 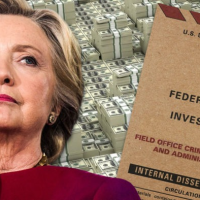