Marilou Danley, the girlfriend of Las Vegas mass shooter Stephen Paddock, worked for the FBI, according to credit application data the Australian national reported as part of a loan application.

That’s the same Danley whose fingerprints were found on Paddock’s horde of ammunition packed into unused rifle magazines.

When contacted Friday, one FBI source said the Bureau “might have made payments to Danley but it is above my level,” the source said referring to access to the FBI’s confidential informant participant and payment records. The source said “bosses are concerned” with the new revelations about Danley’s financial relationship with the FBI.

In FBI speak, Danley could have been a paid asset. And ‘concerned’ means folks are getting ready to cover their own butts if payments were made to Danley either before or after the massacre.

Or Danley. If you can find her. It took the FBI days to locate her and interview her after the Mandalay Bay massacre.

Danley is an Australian national. She is not a U.S. citizen.

Of course this bombshell Intel is coming from FBI sources in the beltway, not the corrupt Las Vegas FBI field office headed by Aaron Rouse. The same FBI field office that has not been able to pinpoint a motive for the Oct. 1, 2017 massacre that killed 57 people.

Little wonder why the narrative doesn’t fit the crime if the person whose fingerprints are on the ammunition also happens to be on your FBI payroll.

A YouTube video surfaced Thursday highlighting a database search with Danley’s apparent employment link to the FBI as reported by database giant Intelius as well. 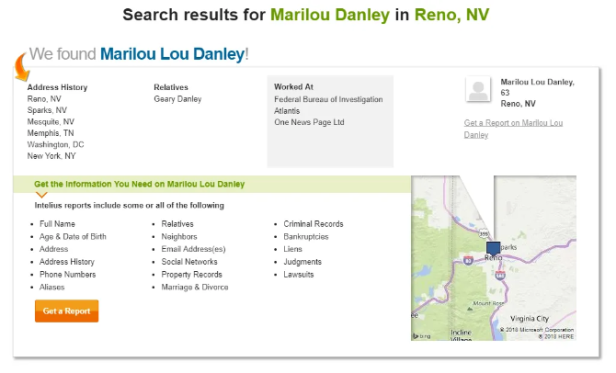 Perhaps a member of Congress can investigate. Trey Goudy or Jim Jordan are likely the only two who would and they’ve got their hands full. Who else can we call? Certainly not Jerry Nadler.

This story is developing.