The Washington Post is not alone when it comes to kind remembrances of the ISIS terrorist Abu Bakr al-Baghdadi, who died igniting a suicide vest in a tunnel in northwest Syria on Saturday as U.S. troops closed in.

During special coverage of President Donald Trump’s announcement on Sunday of the successful mission, National Public Radio (NPR) praised the man who was responsible for beheading three Americans and enslaving and killing an American woman.

Host Lulu Garcia-Navarro led a roundtable discussion with NPR reporters Greg Myre, Tamara Keith and Daniel Estrin about Baghdadi’s death and asked them to tell listeners about the terrorist.

“He led a movement that we’ve never seen before,” Myre said. “ISIS had tens of thousands of members, fighters, coming in from all over the world.”

“They controlled massive amounts of territory — in Eastern Syria and Western and Northern Iraq,” Myre said, adding ISIS had ”millions of people under their control.”

“They had this incredible online recruit presence in terms of spreading propaganda; recruiting followers,” Myre said. “This is a guy that sort of emerged on the scene.”

“And led this group that had done something we’d never seen before,” Myre said.

“This isn’t the end of ISIS, but he was a real leader,” Myre said. “It’s not somebody that they can just appoint somebody else; take over, and the movement continues.”

“His leadership was critical,” said Myre, who finally admitted that the terrorist’s death was “definitely a major blow to the Islamic State.”

Meanwhile, Keith, who is a White House correspondent for NPR, claimed that Trump makes up U.S. foreign policy “on the fly” and the president’s announcement took the “focus away from the muddle and confusion” of his administration. 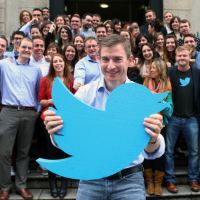