Democrats are still ramming ahead with their impeachment inquiry into President Donald Trump over his phone call with the Ukrainian President Volodymr Zelensky back in July.

House Intelligence Committee Chairman Adam Schiff is still trying to conduct the impeachment witch hunt in secret and behind closed doors, but he just got totally blindsided.

“All Vindman could come up with, all Adam Schiff’s star impeachment witness could do, was complain about petty and meaningless things the transcript might have missed,” said Nolte.

Nolte noted that “we now know the transcript of the call released by the White House correctly informed the public of what was said,” so Trump is once again blameless while Vindman, who hates Trump, is grasping at straws.

“Which means Trump did nothing impeachable,” wrote Nolte. “Which means Nancy Pelosi’s impeachment jihad continues to get dumber by the day.”

Two other officials testified this week and set the record straight.

Former NSC Senior Director for European Affairs Tim Morrison, who listened to Trump’s call with Zelensky, testified on Wednesday that the president did not discuss anything illegal during the conversation.

“I want to be clear, I was not concerned that anything illegal was discussed,” Morrison testified.

Morrison testified that Ukrainian officials didn’t know certain U.S. military funding had been delayed by the Trump administration until late August 2019, which was more than a month after the Trump-Zelensky call.

This destroys the Democrats argument that Trump told Zelensky on the July 25 that he had to reopen the investigation into the Biden’s shady family business deals in order to receive the military funding.

Philip Reeker, one of the top U.S. diplomats to Europe, also testified this week that he did not know U.S. security aid was withheld to pressure Ukraine’s new president to investigate former Vice President Joe Biden and his son, Hunter Biden.

Democrats claim Trump withheld $391 million in military aid from Ukraine in exchange for them investigation Biden.

Reeker testified that he had no knowledge of that at all.

In one week, three top officials with firsthand knowledge of Trump’s call testified that there was nothing illegal or wrong with what the president did or said.

Things continue to go from bad to worse for lying Schiff.

We also learned this week the true identity of the whistleblower who filed a complaint back in August about Trump’s call with Ukraine.

His name is Eric Ciaramella — and it’s worse than we thought.

that the so-called whistleblower who filed a complaint over President Trump’s Ukraine phone call is: (1) a registered Democrat; (2) worked for Obama and Joe Biden when they were in the White House; (3) is a vocal critic of Trump; (4) helped initiate the Russia “collusion” hoax; and (5) was fired from the National Security Council in 2017 for leaks, and returned to the CIA. 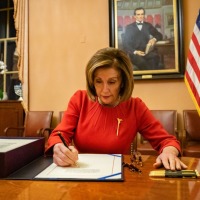