Explosive new internal FBI documents unsealed Wednesday show that top bureau officials discussed their motivations for interviewing then-national security adviser Michael Flynn in the White House in January 2017 — and openly questioned if their “goal” was “to get him to lie, so we can prosecute him or get him fired.”

The handwritten notes — written by the FBI’s former head of counterintelligence Bill Priestap after a meeting with then-FBI Director James Comey and then-FBI Deputy Director Andrew McCabe, Fox News is told — further suggested that agents planned in the alternative to get Flynn “to admit to breaking the Logan Act.”

The Logan Act is an obscure statute that has never been used in a criminal prosecution; enacted in 1799 in an era before telephones, it was intended to prevent individuals from falsely claiming to represent the United States government abroad.

“What is our goal?” one of the notes read. “Truth/Admission or to get him to lie, so we can prosecute him or get him fired?”

The handwritten notes are devastating evidence of an effort to disregard all standing protocols and rules, Sidney Powell said “If we get him to admit to breaking the Logan Act, give facts to DOJ + have them decide,” another note read. Constitutional law professor Jonathan Turley called the document’s implications “chilling.”

The memo appears to weigh the pros and cons of pursuing those different paths. “I don’t see how getting someone to admit their wrongdoing is going easy on him,” one note reads. Flynn did not ultimately admit to wrongdoing in the interview.

The document indicates that the agents at least discussed the merits of a by-the-book approach: “If we’re seen as playing games, WH [White House] will be furious.”

The bombshell materials strongly suggested the agents weren’t truly concerned about Flynn’s intercepted contacts with then-Russian Ambassador Sergey Kislyak during the presidential transition period, except as a pretext.

Former President Obama personally had warned the Trump administration against hiring Flynn, and made clear he was “not a fan,” according to multiple officials. Obama fired Flynn as head of the Defense Intelligence Agency in 2014.

The Justice Department turned over the documents just this week, even though a February 2018 standing order in the case from United States District Court for the District of Columbia Emmet Sullivan required the government to turn over any exculpatory materials in its possession that pertained to Flynn. Such materials ordinarily do not need to be disclosed to uncharged individuals or those who have already pleaded guilty, Sullivan has ruled.

Fox News is told even more exculpatory documents are forthcoming, as Attorney General Bill Barr continues to oversee the DOJ’s investigation into the handling of the Flynn case.

Flynn previously charged that top FBI officials, including McCabe, pressed him not to have the White House counsel present during the questioning with two agents that led to his guilty plea on a single charge of lying to federal authorities. Flynn was not ultimately charged with any Logan Act violation.

One of Flynn’s interviewing agents was Peter Strzok, who has since been fired from the bureau after his anti-Trump text messages came to light.

Flynn has sought to withdraw his guilty plea and has been seeking exoneration, saying the FBI engaged in “egregious misconduct.” Flynn, who has said more recently that he did not lie to the FBI, pleaded guilty in late 2017 as mounting legal fees pushed him to sell his home. Prosecutors have suggested Flynn’s guilty plea allowed him to escape liability for a possible charge under the Foreign Agents Registration Act (FARA), another little-known and once-rarely used law, for his alleged work in Turkey. 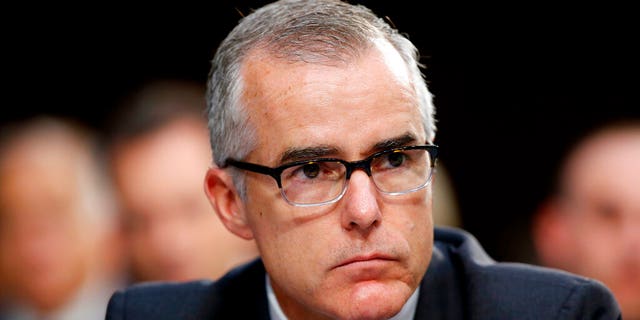 Flynn has since obtained new counsel — and his old attorneys, it emerged this week, then failed to turn over thousands of documents to his new lawyer, Sidney Powell. Powell has maintained that Flynn’s old lawyers at Covington & Burling had conflicts of interest and were otherwise ineffective, including by not focusing on Strzok’s evident bias.

“It’s just absolutely appalling what these agents, and then special counsel operatives, did to General Flynn,” Powell told Fox News’ “Hannity” on Wednesday night. “It’s abuse of their authority at every turn.”

“I interpret the notes as absolutely damning of their conduct and their plan,” Powell went on. “They rejected the advice of the apparent lawyer who wrote on the handwritten note that they not play games with the White House and instead that is exactly what they did.

“Their standard practice in other cases [is] to warn of a [Section] 1001 violation [for making false statements to federal investigators],” Powell continued. “None of that applied to General Flynn. They had only special violations, of every protocol known for him because they were determined to take him out.”

Strzok wasn’t the only top FBI official who apparently bent the rules in targeting Flynn. Comey admitted in 2018 that the fateful Flynn interview at the White House didn’t follow protocol, and came at his direction. He said it was not “something I probably wouldn’t have done or maybe gotten away with in a more… organized administration.”

McCabe later said the interview was “very odd” because “it seemed like [Flynn] was telling the truth” to the two agents who interviewed him. Flynn, the interviewing agents told McCabe, “had a very good recollection of events, which he related chronologically and lucidly,” did not appear to be “nervous or sweating,” and did not look “side to side” — all of which would have been “behavioral signs of deception.”

During the interview, Flynn told the agents “not really” when asked if he had sought to convince Kislyak not to escalate a brewing fight with the U.S. over sanctions imposed by the Obama administration, according to a FD-302 witness report prepared by the FBI. Flynn also demurred when asked if he had asked Russia to veto a U.N. Security Council resolution that condemned Israel’s settlements in the West Bank. (The Obama administration abstained in that vote.)

Flynn issued other apparently equivocal responses to FBI agents’ questions, and at various points suggested that such conversations might have happened or that he could not recall them if they did, according to the 302. The 302 indicated that Flynn apparently was aware his communications had been monitored, and at several points he thanks the FBI agents for reminding him of some of his conversations with Russian officials.

A Washington Post article published one day before Flynn’s White House interview with the agents, citing FBI sources, publicly revealed that the FBI had wiretapped Flynn’s calls with Kislyak and cleared him of any criminal conduct. It was unclear who leaked that information to the Post.

The article offered further support for Flynn’s claim that he was on notice that the FBI was aware of the contents of his communications with Russia even before the interview, and raised the question of why the FBI would want to ask Flynn about those communications. Flynn has indicated in court filings that he was apprehensive about potentially disclosing classified information to the agents.

Strzok and Lisa Page regularly texted to each other about their shared disdain for Trump, and affection for Clinton, even as they worked on investigations involving both Clinton and Trump. Page is now suing the government, saying she wants her therapy bills paid because Trump has mocked her.

McCabe, who has admitted to lying to FBI investigators in a leak investigation, was fired for multiple violations of the FBI’s ethics code.

He has not faced any criminal charges.

The Flynn revelations come as the Justice Department separately has revealed that the FBI’s investigation into former Trump aide Carter Page was riddled with fatal errors — and even featured an ex-FBI attorney deliberately doctoring an email from the CIA to make it seem as though Page’s Russian contacts were nefarious.

In fact, Carter Page was an informant to the CIA about those contacts — a key detail the FBI omitted when it told the surveillance court about Page’s overseas trips.

For his part, after years of legal setbacks and sustained attacks on his patriotism, Flynn took a moment to savor the day’s news on social media. He tweeted a video late Wednesday showing a slow pan to a waving American flag, with no audio but the wind.